I Blame the Enlightened

I don’t need to say much more, the title says it all, it’s the Enlightened’s fault!

This tongue-in-cheek analysis of the Pokémon Go phenomenon draws a startling conclusion to what Niantec Labs and Google have been up to over the past 3 to 4 years. It points a finger, lays some blame and gives some cool hacking tips. 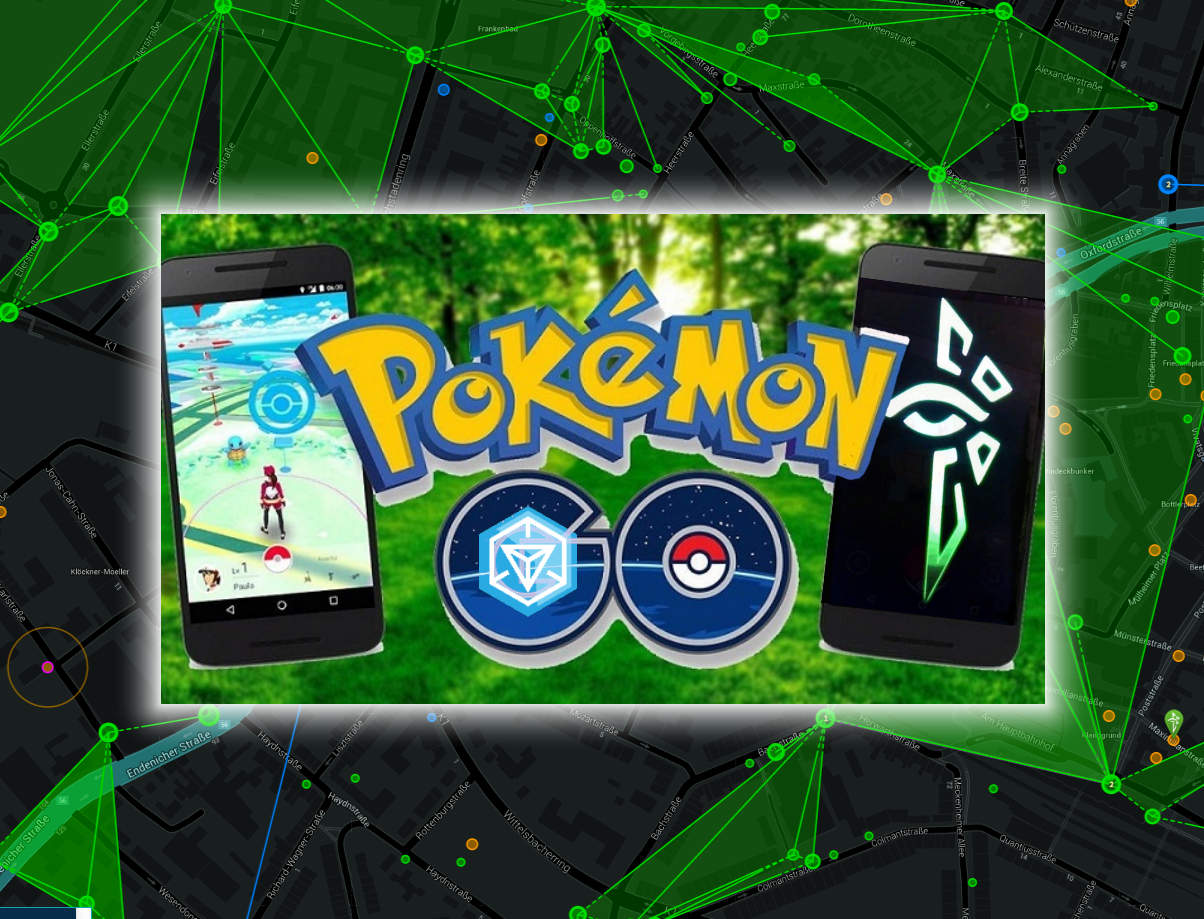 So what is this all about? …. Well everyone has heard of Pokemon Go, at least anyone who has watched the news or just been outside in their neighborhood and observed the hordes of people strolling about staring at their phones, bumping into things etc.

It’s called augmented reality and it has hit the streets big time. Players of these games must physically move about in the real world and interact with objects only visible on their devices, but located at GPS locations on Google maps.

In November 2012 Niantic Inc., originally an internal startup at Google, released its first very powerful invite only game called Ingress.  At first it was only released for Android devices but later opened up to iOS. When a player joins the game, they have to choose which side they will be on. Green or Blue, Enlightened or Resistance.  The Enlightened are said to be open to what is coming from “portals” located at interesting points in most cities across the world, while the Resistance are there to protect the world against what is coming. All of this takes place like a giant capture the flag game with large Ingress events, faction meetings, Google+ and Facebook team pages, meet ups and planning session. Ingress quickly evolved into a global game with players on every continent battling to take over portals and set up fields for their teams. The image below is a global Intel Map from Ingress that shows a world view zoomable like Google Earth from space to near street level. (you have to be a player to login to the map) 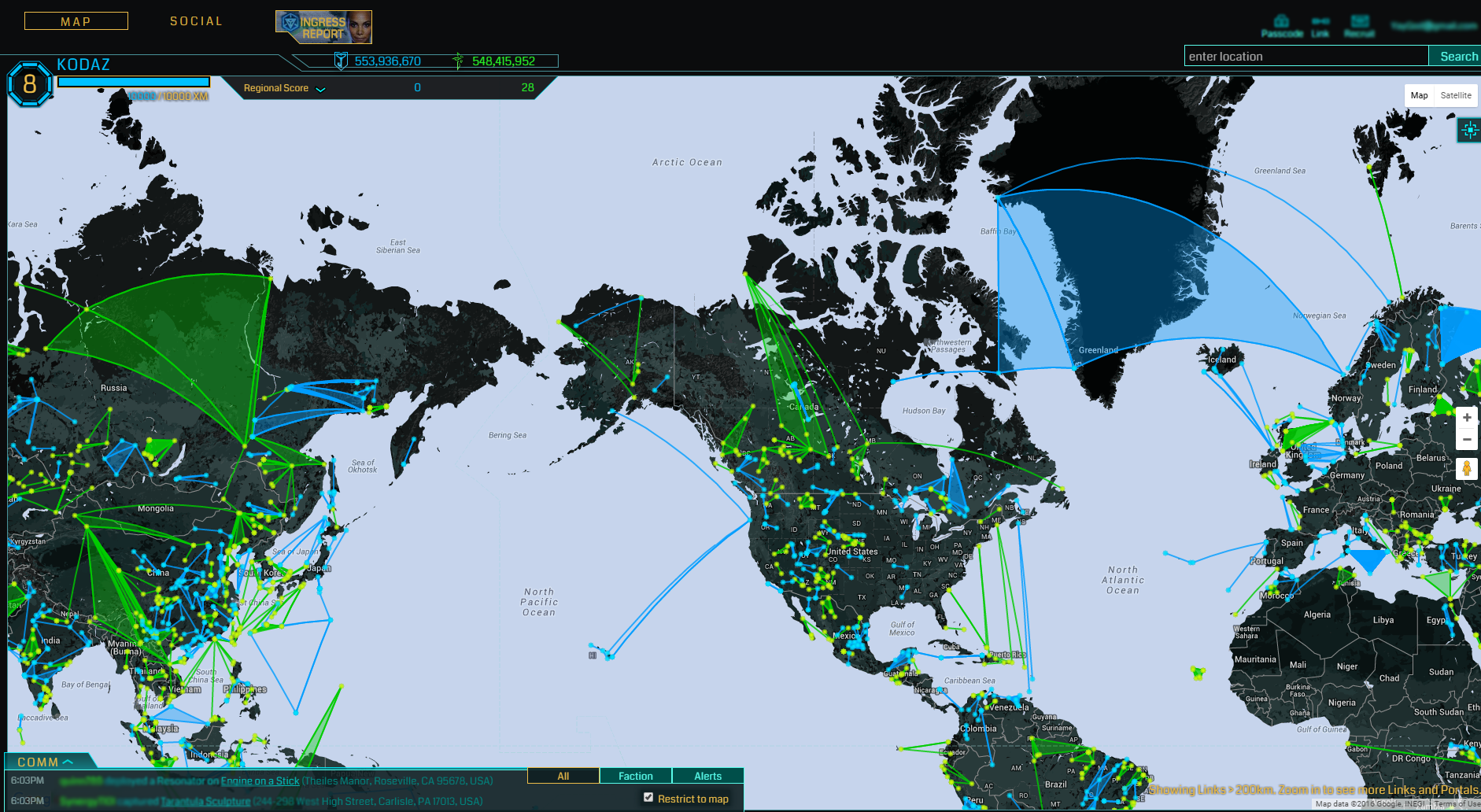 Niantic Inc. was re-positioned out of Google as an independent company in October 2015. They now have 3 software apps that are all based on GPS positioning:

Pokémon Go in a Nutshell

Based off the popular Nintendo game from 1995 “Pokémon” is essentially a world in which humans, known as “Trainers” attempt to catch little fictional creatures called Pokémon and train them to battle each other.  It is a weird concept, but darn popular.

Pokémon Go was released on July 6, 2016 and it takes Pokémon to the next level by adding augmented reality ie. using real world interactions with virtual locations and objects on a real physical map. The players are the trainers and they have to visit interesting locations all over North America, Europe and Australia to find the critters and capture them in the Pokéballs. Other countries including Japan (which was supposed to launch today but has been delayed) and others will be coming online soon.  You can read more on wikipedia about the countries banning or blocking the game.

Players visit Pokéstops and gyms (for training) to gain pokeballs, eggs and experience. Similar to Ingress these locations are based on locations of interest like historical spots, art work sites, statues, memorials and more.

Why Blame the Enlightened?

I blame them because Ingress is all about protecting portals and capturing them for your team. These portals are part of a large mysterious event that follows the Ingress storyline which you can browse through on their site Niantic Project and on the YouTube channel but beware this story is deep and complicated with many twists including characters that have been abducted, informants and more check out this character list

Strange XM or exotic matter was showing up in cities across the globe which power the scanner of the Ingress app. Soon portals started popping up in cities all over the world.  From Niantics own website “The Enlightened” seek to embrace the power that this energy may bestow upon us, While “The Resistance” struggle to defend, and protect what’s left of our humanity.

Clearly the cat is out of the bag and the portals, which happen to be at the same locations as the Pokéstops and gyms, have actually been releasing Pokémon on to the earth since July 6, 2016. The Enlightened beckoned them to come by taking over and powering the portals (as many as they could) with their green glow. The resistance just hasn’t been able to stop them…

The good news is, you can use the Ingress Intel Map as a hack for finding Pokémon Stops and Gyms and use the Ingress app to locate large XM fields where Pokémon creatures, perhaps even the rare ones may appear.

UPDATE: Ingress no longer allows you to submit portal locations as you used to be able to do in the Ingress app, so unfortunately unless there is a change, you can’t use Ingress as a way to build more Pokemon Go stops!

Here is my video (made after not much sleep #qualityissues) explaining the whole schmozzle and my breakthrough realization:

Have business that needs visibility? Where are you at with your Search Engine Optimization? Check out our Free SEO Audit

Ready to jump in and get your SEO game on?  Fill out the Discovery Form